With our roots stretching over 5 generations in Varanasi, you know you’re in good hands when it comes to recommendations about the city. This is our offbeat Varanasi Travel Guide: A handpicked list of places to visit in Varanasi.

But before we begin, let’s be clear on one thing – you’re gonna want to plan at least 3 nights in Varanasi. In all likelihood you will love the place. However, in case your honeymoon with the city is over within a night, you can always take a retreat at Sarnath or travel impromptu to Bodh Gaya. More on that later.

Places to visit in Varanasi:

Undoubtedly, River Ganga is the number one thing to do in Varanasi. Without the river, this city would lose its eminence. Ganga unfortunately is a very polluted river today, but being by and on it still would enthrall you. In the crazy and hectic city that Varanasi is, a stroll by the river or a boat ride on it would offer you calmness that touches souls. Not to mention the numerous encounters that you will have while walking along the ghats… something unique to this city.

Much of Varanasi today is all new development. The ancient city of Kashi—the reason why Varanasi is famous—is mostly located near the river. An interesting fact that most people do not know is that Kashi, or Varanasi, is entirely based on the west side of the river Ganga. East of the river is completely empty land – at least so far. Rumours are around that they want to build a luxury resort on the other side). Our advice to people normally is – “Go lose yourself in the old city. Saunter through the narrow alleys. Just wander around.” For most wanderers this is the favourite part of being in Varanasi. You will most definitely experience what you have never experienced before.

Okay this one is a must see place in Varanasi that many people do not even know about when they plan their visit. It unfortunately stays out of most itineraries. Sarnath is a Buddhist pilgrimage spot about 15 km north of Varanasi. This is where Buddha gave his first sermon to his five disciples. Beside innumerable Buddhist temples and monuments, there is an archaeological site of ancient India’s biggest empire ever – The Mauryan Empire – and a museum for the ones interested. The national emblem of India has been derived from the Lion Capital of Ashoka preserved in this surprisingly well maintained museum.

They say that there have been three great warriors in this world – Alexander the Great, Akbar the Great and Ashoka the Great. Ashoka Maurya that is.

Trivia: Have a look at one of Indian currency bills. See the Asiatic lions? That’s the Emblem of India.

4. The Ancient and Contemporary Hindu Temples

There are quite a few temples in Varanasi…like thousands of them – big and small. At International Travellers’ Hostel “Which one would be a nice temple to visit?” is one of the most common questions. The Kashi Vishwanath Temple (famously: Golden Temple) is certainly the most meaningful temple for Hindus. It’s devoted to Shiv, had made its way in most of the guidebooks, but is not our top recommendation.

We have something else in mind for you. Check out: Kaal Bhairav Temple and Mrityunjay Mahadev Temple. Mahadev being another term for Shiv, this temple is also devoted to him. Kaal Bhairav, on the other hand, is believed to be a creation of Shiv. Apart from Shiv-dedicated temples, one of our favourites is the Sankat Mochan Temple that is dedicated to the monkey god – Hanuman. Another nice temple nearby is Durga Temple (commonly known as the Monkey Temple) devoted to goddess Durga.

If you must see something unique, then Bharat Mata Temple is the place to go. This is a temple dedicated to ‘Mother India’. Here you will witness the technological marvel of Indians who built a hand-carved to-scale map of India on marble bricks laid together. 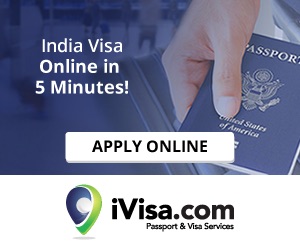 iVisa.com is an affiliate of International Travellers’ Hostel

Situated on the east bank of river Ganga, a boat ride away to the South-East from Assi Ghat, lies the Ramnagar Fort. Belonging to the now-abandoned royal title of Maharaja of Varanasi, the fort was built in 1750. This sandstone structure depicts Mughal style architecture, although at present in deplorable shape. A visit is still recommended to check out its unusual and rare collection of vintage cars, medieval costumes, gold & silver brocaded palanquins, armoury with swords & guns, and silk costumes from the finest weavers of Varanasi to name a few of its attractions.

And when you’re done with the fort, times call for enjoying what is the best authentic Lassi in town – just next door to the fort. Believe it or not, contrasting the typical touristic behaviour, locals from Varanasi are known to cross the river over to Ramnagar merely to have a sip at this popular lassi joint.

Hindi/Urdu: Lal Khan ka Rauza. Built in 1773, ruins of the tomb of Lal Khan houses 11 graves of a single family. A little out of the main tourist areas, this is a good spot to catch a breath and enjoy the beautiful ancient Mughal architecture.

Varanasi is a street food haven. However, hygiene is often a factor to be considerate about when trying street food in Varanasi (or anywhere in India for that matter). It is nevertheless generally safe to eat in the streets here. What you should really be careful about is drinking water – it is the number one reason behind sickness while traveling through India. Water in Varanasi is especially bad, requiring extra care to be taken on your part. There are a couple of street foods that we want to put special emphasis on here – Gol Gappa and Aaloo Tikki. Why? Because these are inventions of Varanasi! What better place to try a food item than in the place of its origin? Our favourite spot is called Dina Chaat Bhandaar. It is situated on Luxa Road. Second to it is just around the corner from International Travellers’ Hostel. Never noticed the name of this one, to be honest. It is a family-run business that has been catering to our family since generations ago.

Testified by a multitude of people that we know: Pizzeria, Vaatika Café at Assi Ghat – great pizzas, amazing apple pie! This is a great spot to have thin crust pizza baked in a wood-fired oven. Guess what else? Their apple pie (yummmmm!) is probably the best apple pie in India. Pizzeria, Vaatika Café is a terrace restaurant overlooking Assi Ghat offering a splendid view of the river – a definite delight to behold as your taste buds indulge in great tasting food.

The Tripling Bistro is a small cozy cafe situated at the youth’s hub of Varanasi i.e. Assi. The cafe offers chinese, italian, continental and indian cuisine along with the freedom to be yourself. The idea behind the cafe is to provide a space where people can spend some time the way they want to. One will always get great music and the place also organises several events on special occasions.

Need a good & relaxing westernized away-from-the-India-chaos coffee break? Look no further. Flavours Café is the way to go. Owned and run by a South African couple of Indian origin, Flavours Café has been testified by Colombian friends to have amazing coffee. We would surely second that opinion. There is also a range of delicious bakery products to enjoy. Muffins…anyone? This is our favourite spot in the city that we go to when we want to chill out in a friendly environment!

Care to chill your tired butts off in an unexpected environment for India’s holiest city? Situated in Hotel Surya is Mangi Ferra – a completely westernized lounge with a bar serving a wide range of alcoholic (and non-alcoholic) beverages; and Indian, western and middle eastern foods. They usually play nice western music to create that chill ambience. There is also a projector installed for sports buffs. But of course our keen interest being the chilled beer (bottle only though) that they serve.

From what we’ve have heard, BHU is Asia’s largest University. Recently designated as an IIT certified uni, BHU is virtually worshipped in Varanasi. If you have the time, it is worth checking out its huge, green and peaceful campus. The uni also has a nice park to relax. If lucky, you might as well encounter peacocks – India’s national bird!

13. The In-house Bistro at ITH: Dhyān

We offer plenty of cozy indoor & outdoor seating, including a beautiful green garden and a terrace.

You can book your hostel stay directly through our website.

This article was last updated on 03 February 2022.

Did you find our Varanasi Travel Guide useful? Share My Wanderlust with your friends and family to spread our love for travel!

Get a Visa Fast: iVisa

Begin typing your search term above and press enter to search. Press ESC to cancel.

This website uses cookies to improve your experience while you navigate through the website. Out of these cookies, the cookies that are categorized as necessary are stored on your browser as they are essential for the working of basic functionalities of the website. We also use third-party cookies that help us analyze and understand how you use this website. These cookies will be stored in your browser only with your consent. You also have the option to opt-out of these cookies. But opting out of some of these cookies may have an effect on your browsing experience.
Necessary Always Enabled
Necessary cookies are absolutely essential for the website to function properly. This category only includes cookies that ensures basic functionalities and security features of the website. These cookies do not store any personal information.
Non-necessary
Any cookies that may not be particularly necessary for the website to function and is used specifically to collect user personal data via analytics, ads, other embedded contents are termed as non-necessary cookies. It is mandatory to procure user consent prior to running these cookies on your website.
SAVE & ACCEPT